Journeying to the Goddess 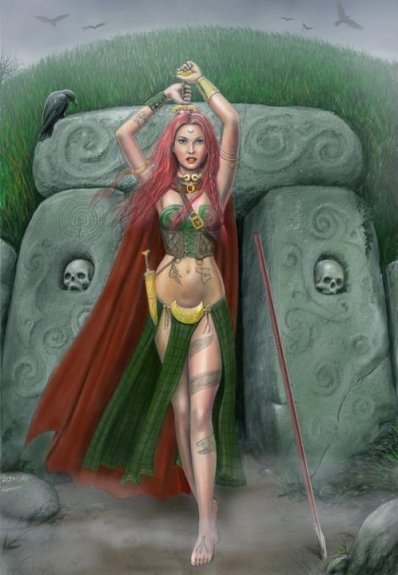 “Macha’s themes are victory, success, protection, fertility and fire. Her symbols are red items, the acorn and the crow.  Macha means ‘mighty one.’ Macha used Her potency to clear the land for wheat, giving Her associations with fertility. She also used Her might to protect the Celts’ lands agains invaders, thereby becoming a war Goddess and guardian. Art shows Her dressed in red (color abhorrent to evil) and with blazing red hair, forever chasing off any malevolence that threatens Her children’s success.

Bonfire Night in Scotland takes place around May 22 and is a festival that originally had strong pagan overtones, the fires being lit specifically for ritual offerings that pleased the Gods and Goddesses and invoked their blessings. Additionally, the bright, red fire looked much like Macha’s streaming red hair, and thus it banished any evil spirits from the earth. So don any red-colored clothing today, or maybe temporarily…

That Candle is Not Magic

People are constantly looking for solutions to problems in their life and looking for ways to attain their most burning desires. Everyone wants to feel that they are in control of things – money, love, career, etc. Lately I have witnessed a lot of people taking a half-assed approach to conquering their problems and reaching their desires.

Magic is work. Magic is not for the lazy and unmotivated.

Whether you are performing your own magical rituals or calling on the services of a magical practitioner to work on your behalf, this statement still stands. Magic is work and is not for the lazy and unmotivated.

Can Anybody Hear Me?

In my first post, Before, 3 years ago, I said “I’m not to After yet, but I’m closer to After than to Before.”

I now weigh 117 – 120 pounds (depending on the day), and standing at 5-foot 6-inches, that measurement means that After is very, very here. But, before you congratulate me, dear readers…if I have any…and dear friends and family who I know follow this blog… I have to come clean with you: I don’t feel like I’m at After. I’m terrified of being at After. And, I don’t like that After is here. 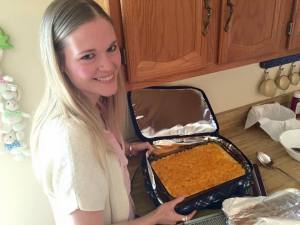 The tagline of my blog is “uncovering myself one pound at a time.” For most of this blog, I’ve spoken strongly about how my relationship with food and myself was what caused my weight struggles. I stand by that. The thing is, the symptoms have resolved faster than I’ve been able to…

When A Coven Comes to Its End

We wrote another piece, but we published it somewhere marvelous, unlike this dump.

“We’d known that the end would come for years, because my ridiculous initiators would wax eloquent about their grand “retirement,’ but it was always some distant time when their 10 year old son would turn 18 and they would retire somewhere in the middle of nowhere. Eight years goes by in a flash when you’re happy. I should have stayed surly.”

Shocker: There Is No Universal Threefold Law in Wicca

The popular misconception that there is a Wiccan Rule or Law of Three or Threefold Return comes from a misinterpretation of a passage in a work of fiction written by Gerald Gardner, the grandfather of modern Wicca. The book was called High Magic’s Aid, and he wrote it with the permission of his High Priestess. It had to be fiction because at that point, witchcraft was still illegal in Britain. In that book and its fictional story, the protagonist undergoes a sort of initiation rite in which he is taught “mark well when thou receivest good, so equally art bound to return good threefold.”

This means that when someone does good by a witch, according to the witchcraft teaching in this *very* fictional novel, the witch is bound to return that good threefold. This is a far cry from “anything at all that you send out into the world will return…

I am grateful, now fuck off.

A mother after my own heart.

It was some time between midnight and 3am. I was dead asleep. I’d fed the littliest at midnight so it was after that, and it was before he woke up for a feed at 3am. This hardly matters, because that time of night is Hell unless you’re pashing, happy drunk, smoking in a bar, dancing, or on drugs – y’know, generally having a fulfilling life that doesn’t involve milk dripping out of your breasts or playing the fart or shit game. So, I’m asleep and I feel this tiny hand on my face and then there’s a kiss on my forehead. And for a second I’m confused like – did the tiny one do that? He’s only four-weeks-old? Is he a mutant? That would be amazing. And then I realise it’s my big baby and I pull him into my arms while still asleep and think “oh he’s delicious”. But…

Why I Breastfeed in Public

All of this – and because there are still so many people who are not aware that it is illegal to harass a breastfeeding mother. Because I was threatened with arrest and missing my flight while nursing my child behind a sling, while wearing a spaghetti strap tank top – meaning, there wasn’t a single thing showing while she was nursing that wasn’t showing while she wasn’t nursing – and yet, the act of breastfeeding her left me open to assault by a TSA employee, despite many people in line around me openly arguing with the woman about my right to breastfeed in public.

The Sea Itself: Living Lineage, Initiations, and Convergent Traditions

reblogging so I have record of this for further study

You Can’t Save the World

I talked to my grandmother today.  She is supposed to go in tomorrow to get scar tissue removed from her eyes so that she can have cataract surgery… she’s talking about not going because, while she has good eye care coverage, the prescription drops for after the surgery are supposed to cost $90 a bottle, and she doesn’t have more than medicare scrip coverage, so they’re basically out of pocket for the whole cost.  I told her she needs to go get her eyes done, and if she needs money for the meds to call me.   Of course, she tells me this after I had already told her that my mother had called me almost hysterical (my mother is good at hysterical) because her car was overheating and they’ve cut my brother’s hours at Target again, so his last paycheck was barely $300 (which is sad considering his hourly rate is $15 an hour as their head of security), so I wired her $200 to get her thermostat fixed.  *sigh*

So my grandmother starts lecturing me on the fact that I cannot save the world.  And, because she’s 80 years old, I let her lecture me.  She’s earned the right at her age to lecture pretty much anyone on just about anything.   But I still told her, that while I might not be able to save the world, I can save as many people in it as I can… and if that means occasionally throwing money at a problem that is immediate and necessary, well, then that is what I will do as long as I have it.  I don’t always have it, but I have it frequently… so I do what I can.  My mother needs a functional car, my grandmother needs to be able to see, people need food to survive.

Why I feel driven right now to save the world, I cannot tell.  Most of the time I just throw my figurative hands up in disgust and lament the lack of humanity in the world.  I ignore the news and bury my facebook feed in silly memes and funny ecards.  Right now though, I just feel like I need to do something to make myself feel better about this world I live in that is so far from the world I want to live in.

Yeah, So About That

A Yankee stuck in Alabama. Yeah...it makes me crazy too.

We're Canadian, after all.

No one speaks for all of us, but some are louder than others.

Shining light on a twisted condition...

Strip Me Back to the Bone